Now we are haggling about the price.

The Washington Post has an opinion piece up by a law professor named Irina D. Manta. The title of the piece is The case for cracking down on Tinder lies, and her thesis is:

There should be a legal penalty for obtaining sex through fraud.

This is an interesting claim, since the basis of our sexual morality is that no one should be expected to do anything they don’t want to do.  Our moral paradigm is that sex is for pleasure, and nothing should get in the way of women and men having sex when and with whom they want to, and nothing should compel a man or woman to have sex if they don’t desire it.

Manta isn’t arguing that women are coerced into sex they didn’t want (at the time).  She is arguing that women of a certain age stop engaging in sex for pleasure and start trading sex for the hope of obtaining financial security.  This is why she is calling it fraud and not rape, not unlike a prostitute willingly trading sex for money only to find out later that her John’s check bounced.

New laws in the dating area should focus on lies that are clearly false, are not easily discoverable before sex takes place, and have a potentially large dignitary or emotional impact. Lies related to physical appearance would thus typically not be punishable, while ones about marital status, fertility circumstances (say, existing children or the ability to have future children) or employment may lead to sanctions.

Not surprisingly, all of the examples she offers of sexual fraud involve older women having sex with men they were mislead into believing were attractive as potential future husbands.  As Manta notes, she understands this situation well.  She points to her own wedding announcement at the NY Times.  The announcement explains that she met her husband in 2017 via online dating, and was 37 when they married in May of 2018.  While I’m confident that Ms. Manta didn’t hit her late 30s and set out to use sex with men she wasn’t attracted to and barely knew as an enticement to bag a husband, no doubt she encountered many women who were doing just that.  I can only assume that her empathy for women who chose a different sexual strategy than she did has lead her to nobly fight to enshrine the Alpha F***s and Beta Bucks (AF/BB) strategy into law on their behalf.

…we punish low-level shoplifting, or false claims in commercial advertising, more harshly than we punish most forms of sexual deception, despite the suffering and harm to one’s dignity the latter brings. For a woman in her late 30s or early 40s who wants to marry and have children, the opportunity cost of a fraudulent relationship can add another dimension to the pain in the form of diminished fertility.

Manta argues that such a law is needed to make it safe for women to have transactional sex with men they know next to nothing about, men who are well outside their own social circles:

There have always been people who tell lies to get sex, but apps make it easy to deceive victims on an unprecedented scale, and in relative anonymity, well outside the perpetrators’ social circles.

Ironically, her complaint is that men making themselves appear more attractive for marriage (vs men making themselves appear more sexually attractive) increases women’s search costs for a husband.  Yet the very women she claims are being victimized will (as a group) have spent a decade and a half raising men’s search costs for wives. 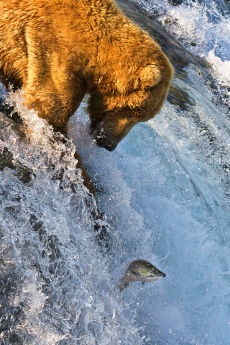 A carouseller returning to spawn.

The male sexual strategy she wants to criminalize is what I dubbed Revenge of the Nerds back in 2010, and is a rational response to women’s AF/BB strategy:

But salmon face a unique problem.  Their route and timing are known in advance, and this makes them easy prey.

If I were a bitter beta I might decide I had a different choice other than “Take it or leave it”.  He knows women of a certain age and a history of promiscuity are going to be looking for a sucker nice guy like him to marry and settle down with.  What if he decides to con the conwoman?  All he has to do is what comes naturally to him.  He may want to learn a little game to make him seem more interesting, but he doesn’t have to move to full alpha status.

All he has to do is put himself out there in places where these women are looking for marks, and look like a better mark than the others.  Since some of the remaining betas will be manning the picket line and the alphas are busy with the new crop of carousel riders, this probably won’t be too hard.  Then he just strings her along for a while, or maybe strings several along all the while talking the provider talk and enjoying the ride.  And since she is in full blown (pardon the pun) bag a husband mode, she’s going to be giving him the best sex she can to seal the deal.  After a while she’s bound to get wise to the jig, but then another  carouseler should be jumping into his  bed to fill the void.

Novaseeker noted that Manta is getting eviscerated in the comments section, and this isn’t surprising.  To start with, she is trying to formalize the AF/BB strategy into law, but the strategy relies on denial.  Key to the AF/BB strategy is pretending that the woman didn’t shift sexual strategies once her youth and fertility were all but gone.  Such women can’t come out and say they are shifting from having sex with the kind of men they are sexually attracted to (sex for pleasure) into a strategy of having sex with men they don’t want to have sex with but think would make a good husband.  Otherwise, the man who mans up and marries a woman in her late thirties after she tires of having sex with other men looks like a chump and his bride looks like a whore!

Imagine if Bumble and Tinder created checkboxes for women to indicate that they only will have sex with men they hope to entice into marriage, and they have a strict one penis at a time policy.  This would make enforcing Manta’s law much easier, but none of the “victims” would want to check such a box.

Even worse, Manta is saying that a man’s marriage vow has substantial financial value to a woman.  Otherwise, why would she argue that a woman should be able to sue a man for $10,000 for giving her the false impression that he would be a good man to use sex to extract such a vow?  And if a fertile successful man’s potential marriage vow is worth $10,000 in sexual favors, imagine what his actual vows are worth, especially once his fertility is converted into children!  In the unimaginable event that Manta has children with her new husband and then decides to divorce him and take his assets, children and part of his income, this logic would mean that she has defrauded him and owes him a phenomenal amount of money!  He after all gave her something of great value, something she would pay $10,000 just to hope to create the opportunity for him to make such a vow.  In that case she would have defrauded him of what he hoped to receive in exchange for his vows, and she would have used her own formal vow to do so.

This entry was posted in Cracks in the narrative, Death of courtship, New York Times, The Washington Post, Turning a blind eye, Ugly Feminists, You can't make this stuff up. Bookmark the permalink.

155 Responses to Now we are haggling about the price.