Cane Caldo explains in I Am Not Called to “Lead” in the Bible:

Our age’s focus on a husband’s leadership is a clever redirect away from the Biblical command for wives to submit and obey. Every instance of Biblical instruction to husbands and wives say the same thing: Wives submit to and obey your husbands. Husbands love and care for your wives. That’s the instruction in 1 Peter 3, Titus 2, Ephesians 5, and Colossians 3; in every instance where the Christian home life is addressed.

The wisdom here is simple, but deep and powerful. If she follows then she is able to fulfill her God-given design. Through Christ she is empowered to be godly even if her husband is a fool; even if he tries to lose her. Likewise, a husband cannot be thwarted from loving his wife. Even if she does not obey him that is no bar to his God-given ability to love and care her despite her wickedness. If he loves and cares for her, and she refuses to obey he is clean. He did not fail to lead.

I’ve written many posts and comments about a husband leading his wife, and I was fundamentally wrong.

When I first read this it was obvious that Cane is right.  But I initially struggled to put all of the pieces together.  Scripture says the husband is the head of the wife.  We can then deduce from this that if he is the head, then he has an obligation to lead.  The Bible doesn’t state that husbands have this obligation, the husband’s stated obligation is to love his wife, and the wife’s stated obligation is to submit to her husband.  But leaders clearly have an obligation to lead.  The specific nature of this obligation is another question, but the basic deduction is solid.  However, modern Christians don’t stop there.  Next they turn the deduction around and run it backwards:

If the husband leads, he will be the head.

The reversed deduction is then substituted for the plain meaning of Scripture.  This is a masterful sleight of hand. From here, submission is likewise reworked:

If the husband leads well, the wife will submit.

Here is the full progression: 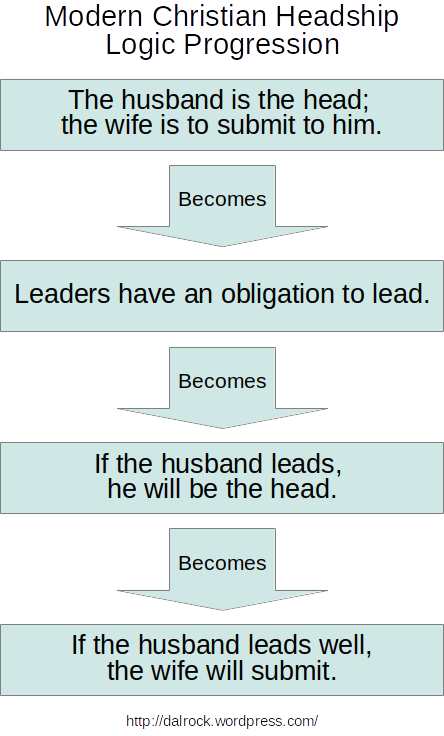 60 Responses to Headship sleight of hand