Evidence of a “marriage strike”?

There are a few other points of interest in the chart I shared in my last post.  First is that the early gap in never married rates closes starting in men’s early thirties until it reaches parity in the 41 to 43 cohort.  This fits with women’s desire to delay marriage, not forgo it entirely.  The goal is to not waste a day more of their youth and fertility on their husband than absolutely necessary.  The goal is not to avoid marriage altogether, nor wait so long that their fertility window has entirely closed.  I’ll share some charts later in the week on women’s never married rates by age, but for now I’ll note that a flurry of marriage for men in their early 30s to early 40s matches with a flurry of marriage for women in their late 20s to late 30s.

But what is surprising in the chart is that after rough parity with the past occurs (around age 38-43), a new gap opens up.  I’m open to suggestions on what this new gap might mean, but it strikes me that this is the pattern we would expect to see if there were in fact men on a “marriage strike”*.  Men refusing to marry wouldn’t necessarily show up in the 20-30 cohorts because women are the ones with the SMP/MMP power then.  They also wouldn’t show up in the 30 something cohorts (when women are frantic to marry), so long as there are other men the women can still substitute for the “strikers”.  But eventually the pool of substitutes will run out, and this is where a strike would show up in the data. 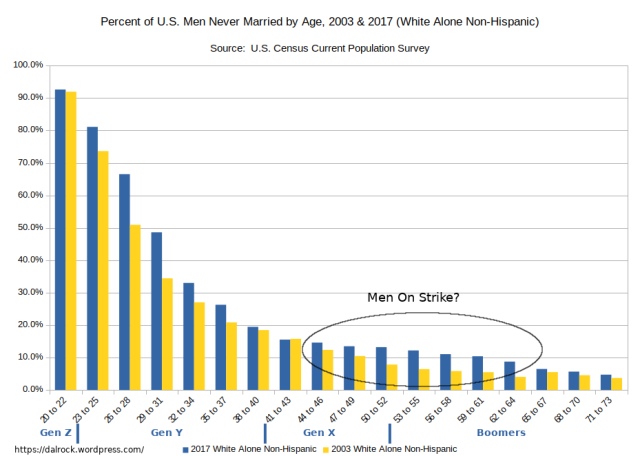 Another explanation would be that this represents a group of men who aren’t desirable for marriage, whether or not they would be willing to marry.  Either way, the initial impact would have been felt by women ten years ago in the form of a shortage of prospective husbands for mid to late 30s women (just as they are scrambling to marry).  This fits with the panic we saw in the Atlantic and other outlets starting in 2008.

For either explanation (men on strike, or men who didn’t prepare to take on the provider role), the obvious catalyst would be the divorce explosion of the late 1970s and early 1980s.  We would expect that this would impact the view of marriage by Gen X and to a lesser degree, Boomer II men, which fits perfectly with the data.

104 Responses to Evidence of a “marriage strike”?