I decided to take another crack at the marital status data by race and ethnicity that I shared on Friday.  Instead of creating multiple charts for each group, I charted all groups at once, only tracking the percent married value.  I still ended up with two different charts however, because for Blacks and Whites the data goes all the way back to 1950, while for Asians and Hispanics there is only data going back to 1990.  Here is the Black and White data going back to 1950: 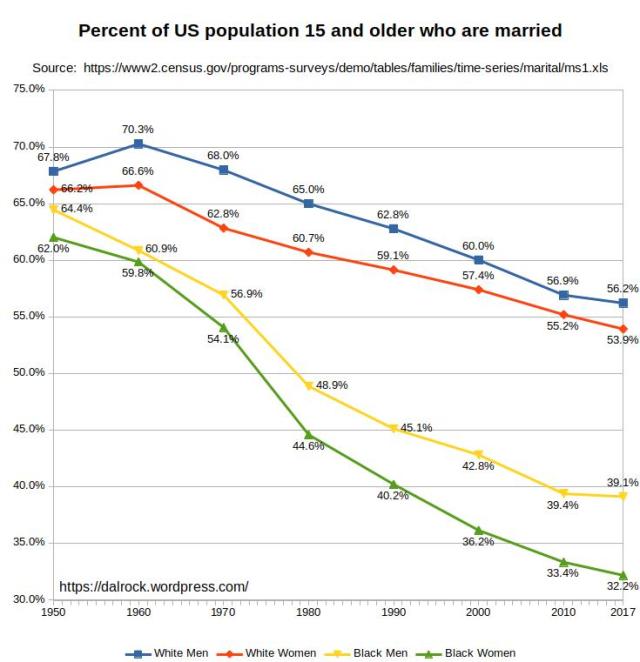 I had no idea that:

At any rate, it is clear that the modern view of marriage has been a catastrophe for Black families.

Here is the same chart, but starting from 1990 and including Asians and Hispanics:

Note that for Whites and Blacks, men are more likely to be married than women.  Yet this is reversed for Asians and Hispanics.  Notice also that Asian marriage rates are very nearly as high in 2017 as they were in 1990, while the same figures have dropped for all other races.  Lastly, as I’ve pointed out before, the data for Hispanics is deceptive because first generation Hispanics have very low divorce rates, but native born Hispanics have divorce rates comparable to Blacks.  Given the pattern we’ve seen with marriage rates declining where the risk of divorce is highest, I would expect Hispanic marriage rates to fall dramatically over the coming decades.

Notes on the charts:

*Edit:  I see from the source data that the number of interviews appears roughly the same on census years as off census years.  So the census year data appears to be just as noisy as off year data.

This entry was posted in Data, Marriage. Bookmark the permalink.