Note:  Most of the data presented in this post is from family profiles produced by the National Center for Family and Marriage Research (NCFMR) at Bowling Green State University (BGSU).  For brevity when referencing a family profile from the NCFMR I will use the NCFMR short name of the profile (eg FP-16-19), with a link to the profile. 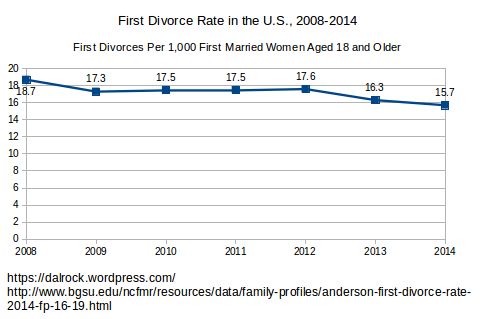 These figures are encouraging on the surface, but they leave out something catastrophic that is going on beneath the surface.  Our new model of marriage simply doesn’t work for the majority of the nation, and as a result large parts of our population are increasingly avoiding it.  This avoidance can take the form of delaying marriage, avoiding remarriage, or avoiding marrying altogether.  The aggregate result of this avoidance means that the percentage of the adult population that is married is dramatically decreasing: 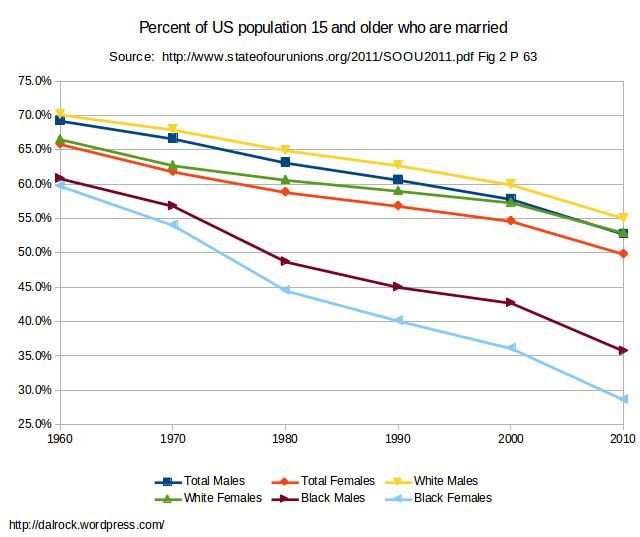 From the chart above you can see that the results are different for men verses women, as well as by race.  A more detailed picture by race can bee seen by comparing the rate of first divorce (FP-16-19) and the rate of first marriage (FP-16-18) by race:

As you can see above, the women who divorce the most are also in the least demand for marriage, and this pattern is consistent across all racial and ethnic groups measured.  The logic of this is intuitive, but seeing it so clearly mapped out is striking. 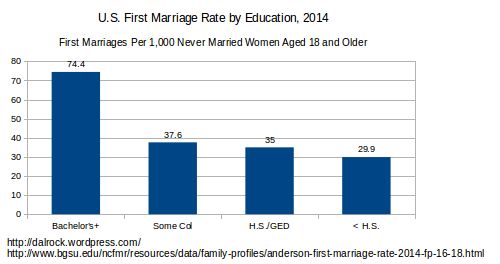 As we would expect, the least likely group of women to divorce (college graduates) is the most in demand for marriage.  However, the women with the highest divorce rates (some college) are the second most in demand for marriage.  Clearly men haven’t recognized the real risk of marrying a woman with some college, and are instead assuming the risk is slightly higher than marrying a college grad.  But aside from “some college” women being out of place in the marriage chart (they should be to the far right), there is another anomaly;  women without a high school diploma or GED have the second lowest divorce rates, but are the least in demand for marriage.  However, this represents an odd corner case, and much of what we are measuring in this category represents first generation Hispanics.

While there are some exceptions, overall the more likely a woman is to divorce the less likely she is to marry. This much is clear from the data.  This leaves us with the question of what is the mechanism that is creating this pattern.  It is always possible that I have the wrong end of the causal arrow, but I think the most logical answer is that men have over time become less interested in marriage where the risk of divorce is high.  But even here, there is the question of the specific mechanism in play.  One very popular theory is that men are individually making a cost-benefit evaluation of marriage and more and more deciding not to marry.  While I think there are certainly some men who are approaching the question in such a clear headed way, I think the much more powerful mechanism has been a slow cultural shift in response to the changing risks of marriage for men.

Instead of men carefully researching the statistics and coming to individual conclusions, I think what is happening is each subculture is slowly responding to the new realities of marriage.  Part of this is cultural knowledge, like the warning to middle class and upper middle class men that it is foolhardy to marry a working class woman, and the warning to men in general to avoid marrying a woman who already has a track record of divorce.  Part of this is also about the changing sense of what is “normal”.  When the divorce revolution first exploded, the men who found themselves ejected from their homes, and the sons of those men, already had formed their opinion on the nature of marriage based on a previous era.  Even though the rules and risk had clearly changed, these men were slow to change their ingrained attitudes on marriage.  Marriage was simply something respectable men did.

But over time, each new generation was raised with a different starting assumption on both the normalcy of marriage and its risk.  This happened fastest where the change in risk was highest.  In working class neighborhoods, divorce rates well over 50% meant that divorce theft, and not lifetime marriage, was the new norm.  Moreover, as women continued to delay marriage, and men became less willing to marry divorced women (or even try marriage again after being ejected from their first marriage), a smaller and smaller percentage of the subculture was married at any given time. In addition, the family courts are merely the formal/legal expression of our attitudes towards married men.  In the past married men were generally seen as respectable, but both the family courts and popular media make it clear that men who marry are despicable (either for being cruel to women and children or worthless fools).

In 1960 70% of white men were married, and in 1970 this had only dropped to 68%.  Even in 1980, with divorce rates peaking, 65% of white men were still married.  If you were white and in the middle or upper middle class, these rates were even higher.  Marriage was still very much the norm, although this was becoming less and less so as each year passed.  Compare this to black men, who saw the percentage of men who were married drop from 61% in 1960, to 57% in 1970, and 49% in 1980.  By 1980 being unmarried was more normal for black men than being married.  This continued to fall, and by 2010 only 36% of black men were married.  This translates into increasing out of wedlock birth rates, and this added to the continuation of high divorce rates means that fewer and fewer children will grow up with married parents.  Over time, the expectation of each generation regarding marriage has changed, but the change has been slow enough to fool many into a sense that our new marriage model isn’t failing after all.

Much of the apathy is that our elites still feel like marriage is working for them;  if the changes they made to marriage have been a catastrophe for everyone else, then everyone else simply needs to become like the elites.  This is a profoundly arrogant and selfish attitude, but since the elites are the ones who frame the debate about marriage there are few voices prepared to challenge this narrative.

The sexual revolution isn’t over.

But even our elites will eventually be forced to recognize the cost of redefining our family.  There is a common belief that the sexual revolution started in the 1960s and ended sometime in the 1980s.  While it may well have begun in the 1960s, the sexual revolution never ended.  Marriage has continued to recede as each cohort marries in smaller numbers, and those who do marry wait until ever later in life to do so.  While divorce rates have dropped some as marriage has become a luxury of the higher socio economic classes, each new cohort is less likely to remarry after divorce.  The real sexual revolution has always been about destroying marriage, and it won’t be over until marriage is defunct as a social institution.  Even if divorce rates continue to either level off or decline, marriage will continue to be something that is relevant to an ever shrinking part of the population.

230 Responses to The rational response to high divorce rates.