America is destroying the Hispanic family.

Usually when you see divorce rates broken out by race and ethnicity, the results look like the chart below, created with data from an NCFMR report on 2010 divorce rates: 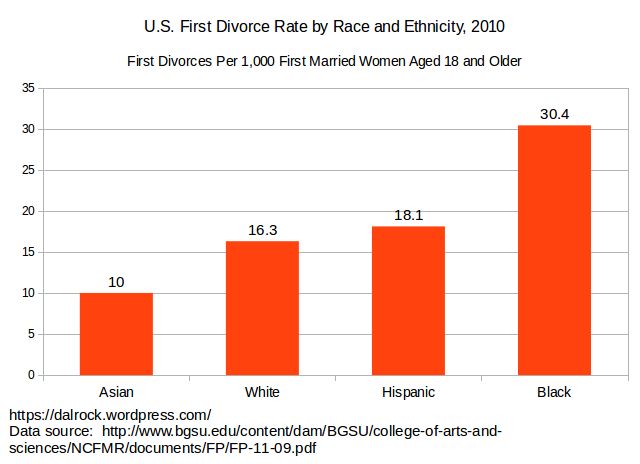 Hispanic divorce rates look slightly higher than white divorce rates, and far lower than black divorce rates, where marriage has all but collapsed.  But this presentation overlooks the fact that something terrible is happening to the Hispanic family following the first generation.  When the NCFMR revisited the same subject with data from 2012 they broke out Hispanics into two separate groups, foreign born and native born:

One thing that stands out between the two charts is the fact that while white and Asian divorce rates remained nearly unchanged between 2010 and 2012, the 2012 data showed black divorce rates as having dropped substantially, from 30.4 to 25.4. Since the NCFMR was crunching American Community Survey (ACS) data to calculate these statistics, there is reason to suspect that the change in black divorce rates was due not to an actual change, but variation due to small sample sizes.

Fortunately earlier this year the NCFMR crunched the ACS data for 2014:

In this latest data set it looks like native born Hispanics have a slightly lower divorce rate than blacks.  Also note that the black divorce rate came in at almost exactly the same figure in 2014 as it was for 2012 (25.8 vs 25.4).  Based on this I would assume the 2010 value of 30.4 overstated the real black divorce rate, and that over the last six years black divorce rates have been somewhere around 25.

In the same report they show that overall US divorce rates dropped slightly between 2012 and 2014, which fits with the drops observed for Asians, whites, and foreign born Hispanics during the same period:

No one sees this because usually all Hispanics are lumped together, hiding the demographic time bomb quietly ticking away.  Moreover, all of our elites are highly invested in the current no fault + cash and prizes system.  Liberals are busy telling us that the only problem with divorce is that we see it as failure.  Instead we should embrace divorce as a heroic act of feminist empowerment, and if we do so families will be just fine.  Conservatives on the other hand are telling us that while broken homes really are bad, our current system is working just fine, and the problem is that people mistakenly believe it leads to high levels of divorce.  Those conservatives who do see high divorce rates as a problem merely shrug their shoulders and suggest that since our new system seems to work fine for our elites, all we need is for everyone to become like the elite.  On the surface it appears that liberals and conservatives have very different takes on divorce, but both are focused on explaining away the very real suffering and devastation our new family model is causing.

132 Responses to America is destroying the Hispanic family.