What Prager and Wilcox are selling.

Brad Wilcox of the Marriage Project made a video for Prager University that along with a rebuttal by MGTOW Turd Flinging Monkey has been getting a good deal of attention.  Be a man. Get married.

From the title alone you should be able to guess what Prager and Wilcox are selling here.  They are selling marriage and fatherhood as a rite of passage into manhood, and specifically a vehicle for men to attain respect.

Less obvious at first glance is what they are not selling.  They are not encouraging marriage to promote sexual morality.  Wilcox is the head of a secular academic organization, and Prager argues that no fault divorce is good for society and has improved marriage:

Most Americans believe that for the past generation, America has been in a moral decline. And whenever conservatives describe this decline, they include the high divorce rate, along with crime and out-of-wedlock births, as a prime example. I believe conservatives are wrong here…

…a truly bad marriage is akin to life imprisonment, and innocent people do not deserve such a punishment. Second, it only takes one person to divorce. Assuming that all divorced people sought their divorce is as untrue as it is unfair. Third, when there are no children involved, a divorce’s social costs to society are minimal and therefore unworthy of our attention. Furthermore, as a rule, it is far better for society to have people marry and divorce than never to marry. When people marry, they begin to grow up, and society needs grownups. Fourth, regarding children and divorce, the effects of divorce usually depend on what happens after a couple divorces.

This is important, because this view of marriage is really just a state certified version of boyfriend and girlfriend, where the only thing remotely resembling sexual morality is a loose ethic of one at a time.  One at a time is a strategy to avoid sexual traffic jams, not anything morally meaningful, so it is understandable why neither Wilcox nor Prager want to stress morality as a benefit of marriage.

This leaves them with potential financial benefits of marriage, along with the status of husband and father, which from a marketing perspective boils down to respect.  Wisely, Prager and Wilcox zero in on respect, and even when they are discussing financial benefits the implication is that married men, and especially married fathers, are respected.  Respect is a primary motivator for men, more powerful than money and sex.  This is why the series can sell responsibility and having to work much harder as a benefit:

This works because in a healthy society responsibility is accompanied by both authority and respect.  Men understand this in their guts.  The only problem with the implication is that as a society we are painstakingly careful not to offer either authority or respect to married men, especially married fathers.  Husbands and fathers are at times respected and honored, but this is despite the best efforts of the law and our moral and cultural leaders.  This is, incidentally, why this kind of promotional video is needed.  To the extent that men are the ones avoiding marriage (which is to say only minimally), the problem is that young men are responding to reality and are less likely to believe that marriage is a path to respect.

In his rebuttal Turd Flinging Monkey points out the cruelty of the family courts, but it is important to remember that the family courts are merely the formal governmental expression of our societal attitude towards married fathers.

But while as a society we see husbands and fathers as at best fools and buffoons, and at worst evil and dangerous, there is still the hope by many men that they will be viewed differently.  Either way, this is as I pointed out above the best benefit Wilcox and Prager have to sell, so it makes sense for them to carry on in this direction.  The video explains that a man who marries is transformed from a bar crawling single man to a respectable family man and member of the local church.  This is ironic because contempt for married fathers isn’t a purely secular phenomenon;  in fact modern Christian culture takes contempt for married fathers so far that even secular observers are taken aback. While secular culture begrudgingly accepts Father’s Day as a day to honor fathers, modern Christians can’t abide the idea of a day to honor fathers and have transformed it into a day to tear down fathers.

The video makes the claim marriage is the only path to this new and respected status: 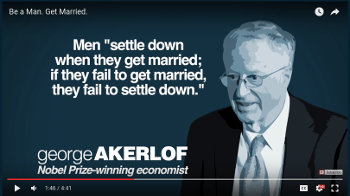 And a critical rite of passage: 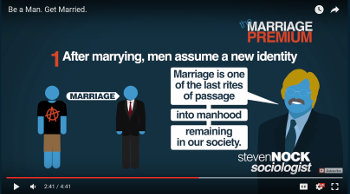 It gives men a new, respected status in the world: 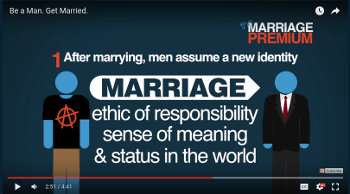 Why is it that marriage can turn a boy into a man when nothing else can?  Marriage comes with a woman to teach you how to be a man:

This is about as effective as a video promoting modern marriage can be, but it won’t have the kind of impact its creators are hoping for.  As Wilcox points out, the median age of marriage for men has gone from 23 to 29.  If this were due to a movement by men to delay marriage, the video would be an effective response.  However, the social change we are seeing around delayed marriage is being driven not by men, but by women.  Most of the young men who will watch this video live in a world where very few women their age are interested in marriage, and they don’t see the men a few years older than themselves getting married.  Signaling provider status is no longer an effective path to sexual success for young men, as most young women in our hookup culture far prefer exciting bad boys to boring loyal dudes.  By the time the women in their generation tire of chasing after bad boys, many of the would be steady eddies have coasted through the better part of their 20s.  The problem isn’t so much that young men don’t want to marry, but that once marriage is suddenly on the table many young men won’t have prepared for it as previous generations of men had.

This is a cultural problem that can’t be fixed by having young men watch a video, because the young men aren’t the ones driving the cultural change.  Moreover, one lesson that men are slowly learning is the very lesson that Prager has been teaching;  marriage doesn’t have any moral meaning.  If this is true, and given the deliberate assault on the status of husbands and fathers, then Turd Flinging Monkey’s response is the most rational perspective.  Of course it isn’t true, but acknowledging sexual morality would upset the feminist apple cart that conservative elites like Prager and Wilcox are so careful not to upset.

186 Responses to What Prager and Wilcox are selling.