What we need is more chivalry! 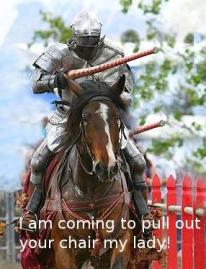 Brendan/Novaseeker made an insightful comment a while back describing what he sees as the core disagreement between the manosphere and non manosphere “traditionalists”:

Actually I think the basis of it is that social conservatives and, to an even greater degree, traditionalists are interested in systemic solutions rather than personal/pragmatic ones. Take chivalry, for example. Social conservatives and traditionalists are generally extremely pro-chivalry, because they see it as a part of a social order they would like to restore/resurrect. The more pragmatic guys in the manosphere, whether “Gamers” or not, view chivalry as mostly self-defeating on the personal level, and so are skeptical of it. Socons and trads may realize that their preferred social order is not returning soon, but they don’t want any *more* steps taken away from it, such as men abandoning chivalry wholesale. This leaves men in a very bad spot in the meantime — acting according to the rules of a social order which no longer exists, and in the context of one which actively punishes men who engage in this behavior in many cases — the socons and trads answer is generally “suck it up, man up, men must lead us out of this, etc.”, where the manosphere typically sees this as futile and instead adapts practical approaches that deal with the current system that is in place, whether they think it is a good one or not.

To me, that is where the hate comes from — socons and trads hate it when more steps are taken away from their preferred order, even if these are pragmatic in light of the current existing order, and manospherians hate it when socons and trads insist on men opening themselves up for extreme risks simply for the ideological hope for a cultural restoration that seems a long way off rather than, you know, actually helping guys live with the system we’ve got currently.

Samson’s Jawbone liked this explanation so much he endorsed it from the other side of the intellectual divide:

This is a brilliant comment, and captures perfectly my frustration with the manosphites who are frustrated with traditionalist conservatives. I say this in case anyone doubted the truth of what Brendan offers here.

Novaseeker mentions chivalry, and this is arguably ground zero for the disagreement here.  To many traditionalists, chivalry is something women deserve from men even when they aren’t acting like ladies.  This is why Lydia’s response to my pointing out that large numbers of modern women are acting like harlots was to decry my loss of chivalry.  We saw the same frame of mind from the traditional blogger I referenced in Trad Con Tourette’s:

[good men are] kindly respectful of women, regardless of whether or not the woman is acting like a lady.  They would never think of using the crude terms flung around the manosphere.

Core to this mindset is a profound denial of the shredding of the social contract by decades of unchecked feminism.  In a move which can only be described as enabling feminism, they most fear and object to anything which would allow feminist women to experience the costs and responsibilities which should naturally come from what they are demanding.  In an era where sluts are literally marching down the street they tell us sluts must be treated like ladies, and modern career women must be treated with the deference reserved for traditional ladies in the Victorian era.

lgrobins has been describing this frame of mind by a group calling themselves Traditional Women’s Rights Activists (TWRAs) in two excellent posts here and here.

TWRA Jesse Powell explains that chivalry must be extended by men to all women equally in On Chivalry (emphasis mine ):

…chivalry is not something that is “deserved” in the sense of it being earned or based on superior merit or it being an expression of preferential treatment due to the woman’s good conduct. Chivalry is a universal duty of the man towards all women indiscriminately; it is a principle of ethical conduct rather than it being in response to any particular behaviors or characteristics of the woman.  Chivalry is also universally desirable and a male duty regardless of the social system currently prevalent in a society and regardless of whether or not chivalry is culturally or legally sanctioned.

Jesse explains further in his coming out letter Why I am a TWRA:

By Jesse’s view of the world, all men owe protection to all women, regardless of the woman’s own actions.  In Jesse’s world, a woman can pretend she is a kick ass member of an elite military unit, she can even provoke other men, and your job as a man is to underwrite her safety even if this means risking your own safety, wealth, and personal freedom. This is not only demanding that men enable feminism at great cost to themselves, this is men enabling feminism at great cost to their own families.  Intervening with violence on behalf of a stranger is generally a phenomenally bad idea, and men who make a practice of this are at great risk of ending up dead/injured, in prison, and/or destitute.  If you take on this asinine responsibility, you are exposing your own family to great risk.

The only rational response by a man is to be discriminating regarding whom he will and will not offer protection to.  Commenter Tspoon said it best:

…yes I’m prepared to underwrite their safety with mine, but like any entity which undertakes to underwrite the risks of another, I have expectations for the behaviour of those I must protect.
Which is where it breaks down somewhat. Outside of my two daughters, it’s been over 20 years since I met or knew a female of whom I knew, without reservation – That I would in fact guarantee her safety as far as I could. Outside of a minor miracle, I have no anticipation of meeting another…

This entry was posted in Chivalry, Foolishness, Slut, Traditional Conservatives. Bookmark the permalink.

317 Responses to What we need is more chivalry!