In Search of the Peter Pan Manboy.

I was curious if the mythical Peter Pan Manboy we hear so much carping about lately was visible in the data, and since those making the claim are generally elusive on the stats I’ve pulled my own.  The data set I chose is the same data set I used to evaluate ever married rates, the US Census Current Population Survey including the Annual Social and Economic (ASEC) Supplement.  This data set excludes the homeless, those who are institutionalized, and those who are overseas.  Note that the figures reported are earnings, not income.  For more technical details, see this.

Since the Peter Pan Manboy is by definition unmarried and young, lets look at unmarried men and women in their early 20s.  Focusing on unmarrieds allows us to exclude housewives from the data when comparing men and women. 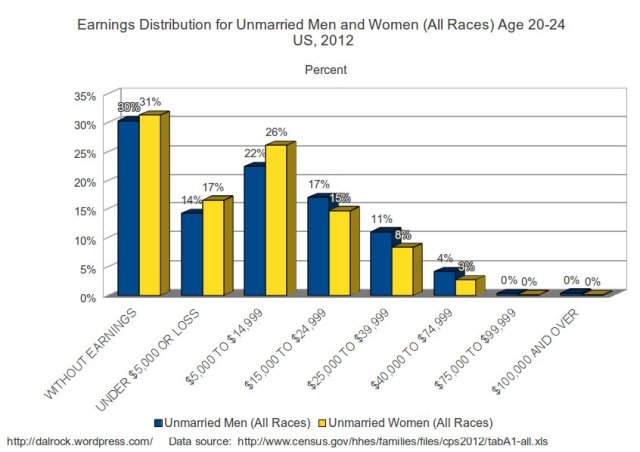 If we were only looking at men it might look like we had just found what we are looking for.  30% of unmarried men in this demographic earned no income in the previous year, and 67% of them earned less than $15k.  However, the myth says that these are men who are slacking off while their female peers have their acts together.  The women in this category look even worse:  31% of them had no earnings the previous year, and 74% of them earned under 15k!

Don’t be discouraged though, we may still find our mythical manboys.  Women tend to marry earlier than men, and as a result there are fewer unmarried women in this age group than men (9,211 vs 10,014).  Perhaps the issue isn’t regarding the percentages but overall numbers:

While there are slightly more men than women in the zero earnings group, this can’t be what all of the fuss is about, especially if you look at the other two categories under $15k.

Don’t give up yet.  Maybe we are looking too young.  Women are more likely than men to go to college, so maybe looking at early 20s is too young.  Certainly girlpower and moxie must be in full swing by the time we look at unmarried men and women in their late 20s:

It isn’t there either.  Perhaps again this is an issue of raw numbers vs percentages: 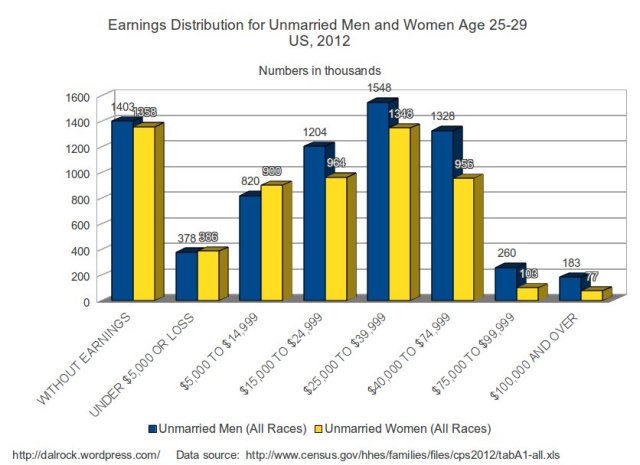 Again, the raw numbers aren’t impressive for the late twenties either.  But perhaps we need to go yet a bit older:

This is even worse for women, as are the raw numbers: 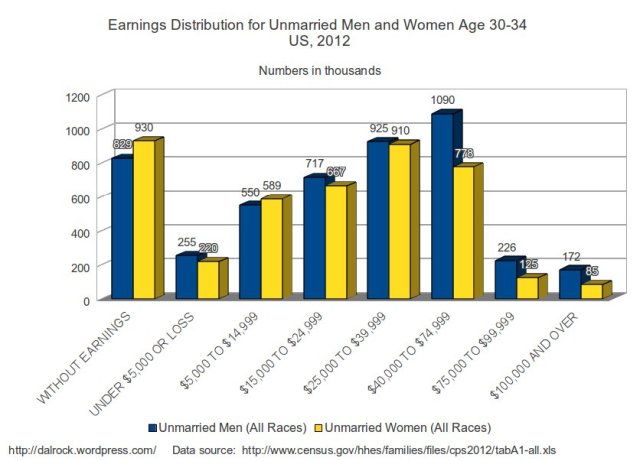 One thing which is worth noting is that looking at unmarrieds tends to bias this search against men, because low and non earning men are the least desirable marriage prospects.  Additionally, men tend to earn more money after marrying than unmarried men with the same level of education and experience do.  If we looked at married men and women or simply all men and women, this would make men look better relative to women so it wouldn’t help in our search.

But perhaps this is an issue about race.  The writers complaining about the Peter Pan Manboys tend to be white;  could this phenomenon be something specific to white men?  Nope.  It isn’t there either: 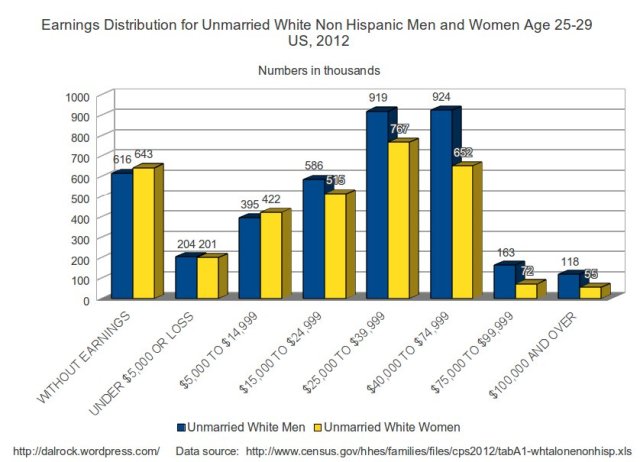 In looking at this I ended up making a much larger number of charts than I have included in this post.  I’ve created separate pages including these charts for White, Black, Asian, Hispanic, and All Races.  Feel free to check them out and make sure I didn’t leave something important out.

While I didn’t find confirmation of the myth, I am astounded at the number of unmarried men and women who earn either nothing or extremely small amounts.  Certainly part of this is due to the poor economy.  However, I have to wonder if we aren’t seeing men no longer perceiving heading a family as an incentive to work harder, and therefore the real complaint is that single men have started working more like single women.

Either way, there is a serious issue with too many takers and too few makers.  Perhaps most striking is the number of unmarried White men and women in their 40s who earn nothing:

See Also:  How the destruction of marriage is strangling the feminist welfare state.

This entry was posted in Data, Patriarchal Dividend. Bookmark the permalink.

166 Responses to In Search of the Peter Pan Manboy.