Children are as likely to end up living with neither parent as they are with just their father.

The Census has the 2012 Families and Living Arrangements data out so I pulled a copy of Table C3.  Here is the latest data on the living arrangements of children in the US under 18 (all races):

The table has the same category breakdown for fathers that are in the chart for mothers, but the slices were too small to be meaningful and made for too much of an eye chart.  To clean it up a bit further I consolidated the married and unmarried categories for “Both Parents”, and did the same for the different categories of children living only with their mother: 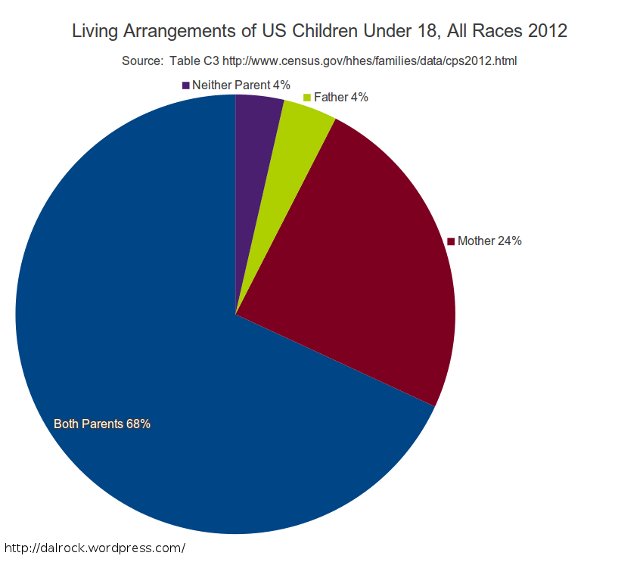 Note that children are as likely to be living with neither parent as they are to be living with only their father.  I’ve shared stats and an exposé on the bias in the custody system previously, but this is pretty much says it all.

When you combine the profound bias against fathers regarding custody with our no fault divorce process the truth is that fathers are legally “deputy” parents.  Just as deputy sheriffs “serve at the pleasure of the sheriff”, in the US fathers serve at the pleasure of the mother.  The fathers in the “both parents” category are not on equal legal footing to the mothers.  They are merely fathers the mothers haven’t decided to eject or replace yet.  As a result, we could more accurately label the category “Both Parents” as “Mother’s Choice”:

In fact, some of the “fathers” represented in the data are already replacement fathers, as the Census data doesn’t distinguish between actual fathers and the man mommy replaced him with (stepfathers).  They don’t note this in Table C3, but it is explained in definitions section of the Census paper Living Arrangements of Children: 2009:

Children are defined in this report as all individuals under 18 years old.  The survey asks respondents to identify the child’s mother and/or father if they are present in the household. A separate question asks respondents to identify the type of relationship between each child and parent, whether biological, step, or adoptive. All living arrangements are as of the time of the interview.

Stepchildren are identified by the survey respondent, and their stepparent may not be currently married to the child’s other coresidential parent.

They of course use the gender neutral term “parent” which is technically accurate but highly misleading.  Because of the bias in the custody process, mothers receive custody over 80% of the time.

This means that 80% of the time when a “parent” is defining if the non biological parent they live with is a “coresidential parent”, mommy is defining whether the latest man she is shacked up with is the child’s step-father, and whoever she defines as the step-father at that moment is then treated as the actual father in the data.

132 Responses to Children are as likely to end up living with neither parent as they are with just their father.