If you’ve ever looked at pictures of ancient coins you may have noticed that they are typically not very round. One method of debasing ancient coins was to shave off bits around the edges, a practice called clipping.  The debaser could then collect up the gold or silver shaved off of multiple coins while passing the clipped coins off at face value.  The practice was of course highly illegal, but the problem was as a merchant it was difficult to draw the line on when you would and wouldn’t accept a coin at face value.  If only 1% or 2% of the metal was gone you knew you didn’t have much to worry about.  But as the money circulated longer each incremental bit of clipping started to add up.  Once the original line was crossed it was difficult to know where to refuse a coin.  So long as you could pass it off on someone else you were fine, but you didn’t want to be the final sucker in the chain who foolishly accepted the debased coin at face value.

One of the steps taken to prevent this kind of debasement was to mill the edges of coins.  This way it was more obvious when even a little bit had been clipped off.  This is why US quarters have milled edges;  quarters used to be 90% silver, so there was some incentive to clip.  When the government switched to copper-nickel clad quarters they kept the milling as part of the design: 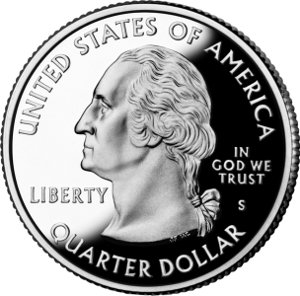 Men looking to marry face the same kind of dilemma ancient merchants used to face.  Feminists and their enablers have slowly shaved off the value of marriage for men.  Marriage for men no longer means:

As each new bit has been shaved away, men have had the choice of either accepting debased marriage at face value or walking away:

As men came to accept each clip, additional clips were continuously made.  Women chose to marry later in order to first have a degree.  This older bride then came with a little extra attitude, maybe some student loan debts, and perhaps more expensive tastes.  Again, the choice by men was to accept what was commonly on offer or avoid the transaction altogether.  After all, this is what everyone else was accepting:

Ok, it isn’t quite as good as the last round, but what are you going to do?  In the end if you don’t look too carefully it kind of looks like the same thing.  But of course the clipping hasn’t stopped there.  That wife who waited to marry until she graduated college really needs to get a career before marriage so she can complete her feminist merit badge.  This even older and less attractive career gal wife of course comes with even more feminist attitude, and somehow still comes with student loan debt.  She also now has a legal incentive to divorce in the form of cash and prizes and nearly guaranteed child custody.  Oh, and we also have some new laws which assume you are an abuser if your wife decides she needs some drama or extra leverage against you.  But what are you going to do?  Aren’t you man enough to accept her?

There’s just one more small thing.  It took her so long to find you that you can’t reasonably expect her chastity to be perfectly in tact.  I mean, it’s mostly there, but it suffered a ding or two.  Her virginity was gone to her first boyfriend, but don’t worry it was very romantic and she still has fond memories of that special time.  Not too long after that those jerks at the frat house did a number on her pride, but you can’t hold that against her.  She’s a bright gal, and after that she learned how to hook up smart.  There were, I think, a few other clips along the way.  Nothing too serious, but after all remember it did take her forever to find you.  Your little bird may not be quite as young and innocent as she would have been had she found you sooner, but there is always hope.

You may now kiss the bride.

This entry was posted in Aging Feminists, Choice Addiction, Finding a Spouse, Marriage. Bookmark the permalink.