There is a widely held belief among Christians, even in the manosphere, that Christians in general are standing up against feminism and the debasement of marriage but the culture isn’t responding.  The myth of Christians and the church “fighting the good fight” is one that won’t die no matter how many times I or others debunk it.

The United States is frequently pointed out as being as the most religiously conservative nation in the western world when it comes to sexual morality, and indeed there are stats to back this up.  If you ask the average American who are the most zealous Christians fighting against feminism and for the family as defined in the Bible?, they will almost undoubtedly respond with some combination of Focus on the Family, the Southern Baptists, and Pat Robertson’s CBN & The 700 Club.  These are the groups Americans, the religious fundamentalists of the western world, see as the most extreme defenders of the traditional family.  Yet as I’ve shown the Director for Family Formation Studies at Focus on the Family calls unwed mothers heroic, explains that women deliberately having children out of wedlock is proof that men aren’t worthy, and tells parents that their daughters have an innate goodness which their sons lack.  More recently we’ve witnessed Dr. R. Albert Mohler Jr., the president of the Southern Baptist Theological Seminary teaching that God intends for husbands to be purified by submitting to their wives.  Elsewhere I’ve shown Pat Robertson’s 700 Club presenting an unwed mother as a Godly woman, plugging her book extolling the virtues of single motherhood:

CBN.com – Actress, single mother and author, Janine Turner was inspired to write Holding Her Head High: Inspirations from 12 Single Mothers Who Championed Their Children and Changed History. Her book describes the social implications for women and children from the Roman Empire through the Middle Ages to Pioneer days…

If you asked the average Christian to recommend a movie which presents biblical marriage or fatherhood, they are almost certain to suggest a Christian divorce fantasy or a movie which disparages Christian fathers and cuts Christian husbands off at the knees.

I could of course go on for some time on this.  I could talk about the fellow manosphere bloggers who had their marriages shot out from under them by the Catholic Church.  I could show conservative Christians rationalizing that the Bible calls for a meaningful symbol of women’s submission, so long as it doesn’t actually symbolize submission.  I could show how Christians have entirely reframed biblical marriage, and how even the most traditional Christians see the word slut as a slur against all women, defend the ever increasing age of marriage, and look down on women who marry and have children without first attaining a degree and having a career.  I could (and have) shown all of this and more, but it wouldn’t matter.  For most Christians nothing can pierce their credulity of the ultimate pretty lie, their unshakable belief that modern Christians are not actively and passively collaborating with feminism.

To believe otherwise would shatter one of their most cherished narratives, that their pastor and fellow congregants are part of the earthly team fighting the good fight.  This is why Christians everywhere cheer when Glenn Stanton boasts that the most devout Christians have a 38% divorce rate, and it is why they are far more interested in discussing what a handful of non Christian men like Roissy are doing wrong than the fact that hundreds of millions of Christians are defiling marriage in Christ’s name.  Focusing on Roissy’s sin makes them feel morally superior as a Christian, and this is the crutch which has allowed Christians to continue on this path for many decades.  The alternative would be to acknowledge the unfathomable betrayal of the Bible by this generation of Christians when it comes to sexual morality, men and women, and the family, which would (and should) be deeply humbling.

I recently challenged commenter GKChesterton on this very point:

Never forget that Christians are driving this mess. There is a myth that Christians in general are fighting the good fight but the culture is winning out. It is a lie. The most conservative Christian voices are leading the charge to stab biblical marriage in the back, and they are effectively doing so in Christ’s name. See Glen Stanton of FOTF and Dr. Mohler of Southern Baptist Theological Seminary for just two examples.

He replied that Christians haven’t failed in their duty to uphold biblical marriage, and that what appears to be collaboration with feminism is merely Christians trying to be nice (emphasis mine):

I would submit that absent Christianity and the Christians that believe in it you wouldn’t even know a marriage problem existed. Therefore no, I disagree that this is specifically a Christian problem. I believe many alpha cads are making it such, but they are lying as they oft do. I think Stanton et al are making a classical Christian mistake in that they are elevating “nice” into a virtue. It is not. Nor is this problem new. The sexual abuse problem resulted from the same way of thinking.

This kind of denial is part of a larger Christian institutional resistance to change.  While the enthusiasm with which the modern church has collaborated with feminism is deeply shameful, the psychology involved isn’t surprising.  This is the same psychology business leaders and project managers face when attempting to change secular structures where individuals have become personally invested in the status quo.  Note that this doesn’t mean that at a logical level the individuals resisting change actually agree with feminism.  Many are simply reacting emotionally and psychologically out of fear of change.  Either way, the reflexive resistance to any effort to move back toward the biblical model of marriage is profound and relentless.  This takes on many forms, but the underlying theme is often that there either isn’t really a problem or that the problem can’t possibly be addressed.

One form of denial and resistance is the claim that biblical marriage really isn’t something Christians should concern themselves with.  A commenter named Jimmy on Vox’s Alpha Game blog was troubled that I spend so much energy pointing out that the Church is turning its back on biblical marriage:

Note his absurd claim that my focus is on dating in an effort to change the topic to something unimportant to the church.  Further down he complained:

A bit further down he reiterates to another commenter that what I have shown is trivial, and only distracts from important work of the church:

You might not like how churches function, but what you’re complaining about won’t get you where you need to go. Ministry is the primary function of Churches. It is should be the focus, not the side show of recommending who to date.

In what is very common form, when I pointed out that my focus is on marriage and challenged Jimmy to point out where I had ever chastised the church for not focusing on dating, he explained that he of course agrees with me.  He isn’t the one resisting a move toward biblical marriage:

I do get the complaint about not adhering to Biblical marriage. The church focuses on men sacrificing to their wives instead the wives making a sacrifice is well noted. I completely agree with you on this issue.

Another method of obstructing any attempt at change is to set the bar for evaluating change absurdly high.  Commenter Unger demonstrated this with a recent comment:

What evidence do you have that Game will make better women from the only perspective that matters in the end, which is concerned with saving their souls?

Unger is saying that the millions of children who suffer the devastation of having their father kicked out of their homes isn’t sufficient reason for Christians to attempt to move towards a biblical model of marriage.  All that matters is whether the child’s unhaaapy mother’s soul is saved.  Don’t worry that Christians are providing the moral cover under which marriage is being destroyed. You must first prove that any action you take will save the rebellious wife’s soul.

The hallmark of the inhibitor of change is that they only offer criticism of the suggestions by others.  Very often they aren’t even aware of what they are doing.  They are standing up for biblical marriage in their heads, even if in practice all they can offer is resistance to change.  Note that this is different than mere disagreement on how to address the problem;  honest Christians can and will disagree about the best way to restore biblical marriage.  This can be discerned by how seriously the objector to any given idea is actually working to offer their own fixes or improve the ideas of others. 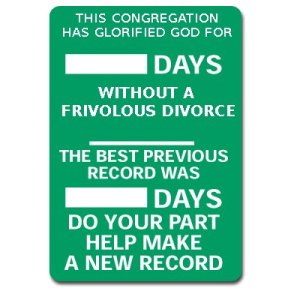 The seriousness of the alternative is extremely important, because it is common for solutions to be offered which claim to address the problem but which present no real challenge to the feminised church.  For example, several years ago I proposed that churches might discourage frivolous divorce simply by measuring it.  Not surprisingly quite a bit of the response by Christians was that this wouldn’t be fair because it would hurt and embarrass women.  Others rejected the idea while claiming to agree with the goal, offering an unthreatening solution instead.  Christian blogger Bike Bubba explained that the problem with measuring divorce is it measures an outcome, and missed the real issue:

I’ve got two big reservations about using statistical methods in the church.  The general problem is that those who use them a lot in a corporate setting know very well that they tend to be applied in an impersonal, “hands off” way.  Management loves these in great part because it allows them to “do something” without really interacting with the people involved.  Disaster often ensues because the statisticians and managers don’t realize that what they’ve found only correlates to the real problem–but is not the real issue.

Ah, but what is the real issue, if it isn’t frivolous divorce given moral cover by the church and relentlessly sold by the culture as empowering to women?  I know that the millions of fatherless children are eager to know.  Fortunately Bike Bubba explains:

Regarding the proposal specifically, it falls into the problem of measuring outputs instead of inputs; a divorce is not a cause, but is rather the result of years of poor decisions by one or both spouses.  The husband decides he doesn’t need to be discipled, or to disciple his family.  The wife looks elsewhere for spiritual leadership.  Without discipleship, that wonderful part of marriage gets neglected.  One or the other looks elsewhere, and then things go rapidly downhill from there.  Church members who have said “hi” to them for years, or decades, are shocked.

The problem is not that Christian women are taking the feminist bait and rebelling, the problem is strictly a failing of Christian men.  Fortunately there is a glib answer to all of this, now that we know that 40+ years of feminism have nothing to do with the problem.  The solution is made even better by the fact that it won’t make feminists in the church uncomfortable:

Put simply, if you want a statistic that you can use to improve your church (and reduce the divorce rate), count the number of members who are actively discipling their families and each other, and have the pastor and deacons guide that effort.

Sometimes, it really is as simple as…..the Gospel.

303 Responses to Christian denial and institutional resistance to change.