This is an update of the data I posted in August last year.  See the previous page for details on where the data through 2007 came from.  I added 2009 data from the report here and updated the charts.  The basic narrative is unchanged:

It starts with who is granted custody: 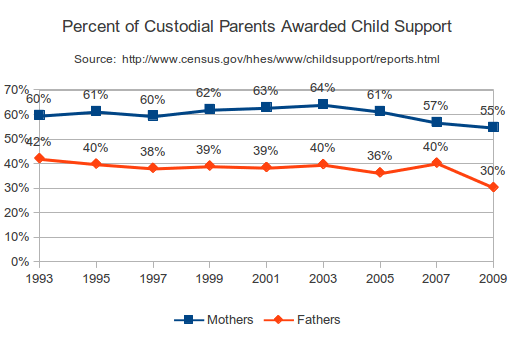 In the past the system was also biased against fathers in the percent owed which was collected.  This looks to be a wash now: 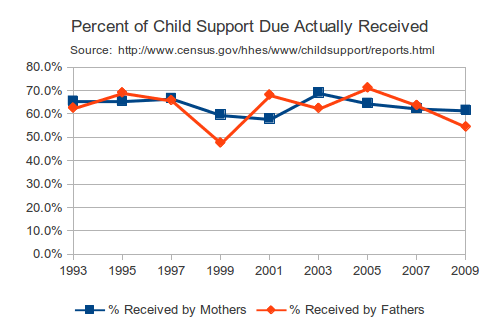 However due to bias in amount awarded, the average amount received by fathers is still lower:

As a result of all of these biases against fathers, the percentage of all child support dollars paid is extremely biased:

The 2009 data seems to confirm that the 2007 data was an anomaly, and didn’t represent a trend towards slightly less bias against fathers regarding total dollars received.  My best guess is the 2007 anomaly was due to sampling error, because the change in the population of parents receiving support shouldn’t be great over such short time periods.

Here is the excel version of the spreadsheet I used to create the charts.  The original spreadsheet is from Libre Office so there may be some artifacts from the conversion.  As always, please let me know if you find any errors in my calculations.

This entry was posted in Child Custody, Data, Fatherhood, Motherhood. Bookmark the permalink.