When people consider the sexual revolution over the last 100 to 150 years, the invention of the concept of “boyfriend” tends to be discounted.  Other milestones tend to be given greater consideration, and while all of them are relevant, the profoundly disruptive nature of the new concept of boyfriend shouldn’t be overlooked.

Note:  I don’t claim to be an authoritative expert on the history of courtship.  What I’m sharing here is what I’ve been able to piece together based on conventional wisdom and some moderate searching on the web.  If you can provide sources to information which I’ve omitted I will be in your debt. 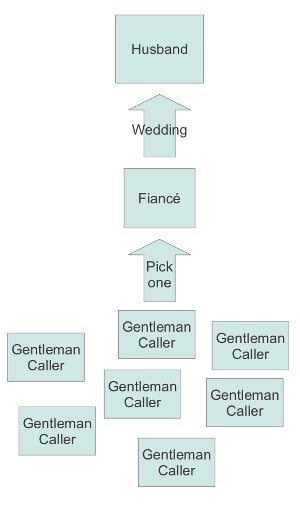 As best as I can tell, until roughly 100-150 years ago courtship in the west looked something like the diagram to the right.  A woman looking to marry would spend supervised time with a number of gentleman callers who had been vetted by her family.  After some time she would select from the available men, with the formal proposal coming from the man himself.

One example of courtship rituals used in the past is the courting candle.  These allowed the father of the young woman to determine a set amount of supervised time which a caller could spend with his daughter:

When the daughter’s suitor came calling, the father lit the candle in a sitting room where the couple conversed. When the candles burnt to the metal at the top of the candle holder, it was time for the suitor to promptly leave.

Note that not only did the suitor not take the young woman out on exciting dates, but there was also no expectation that the young woman should fall in love with a series of men before deciding whom to marry.  Yet somehow this latter concept has become sacrosanct, even amongst the most traditional minded.

From the point of view of the feminine imperative, something had to give.  How was a Victorian woman supposed to feed the hypergamous beast which lay beneath her prim and proper exterior?  An entirely new creation was needed, something which previously had lacked even a name.  Between 1895 and 1900, that name was created.  Over time this new term bridged the gap between the concepts of illicit lover and husband.  It solved a number of problems for the feminine imperative, providing three essential benefits which previously were only available in (once and done) marriage.  Inventing the concept of boyfriend created a socially approved mechanism for women to obtain/experience the following three things without having to choose/commit to one single man:

Of the three, the last tends to be overlooked by the game side of the manosphere.  Women’s primal desire for the status accrued by a formal relationship with a worthy man, especially marriage, is a counterforce against the hypergamous fear of commitment.  This counterforce appears less significant than it really is because women assume they can have marriage for the taking, at least until it is too late.  The concept of boyfriend finally allowed unmarried women an option for a sort of marriage lite, where the status and morality of marriage were on offer in diluted form.

When looking at the modern SMP, the introduction of the hookup culture is what is most striking to most observers.  However, the innovative concept of boyfriend still plays a central role in providing the essential stamp of propriety the feminine imperative requires.  In fact, the boyfriend is the glue which holds the entire process together: 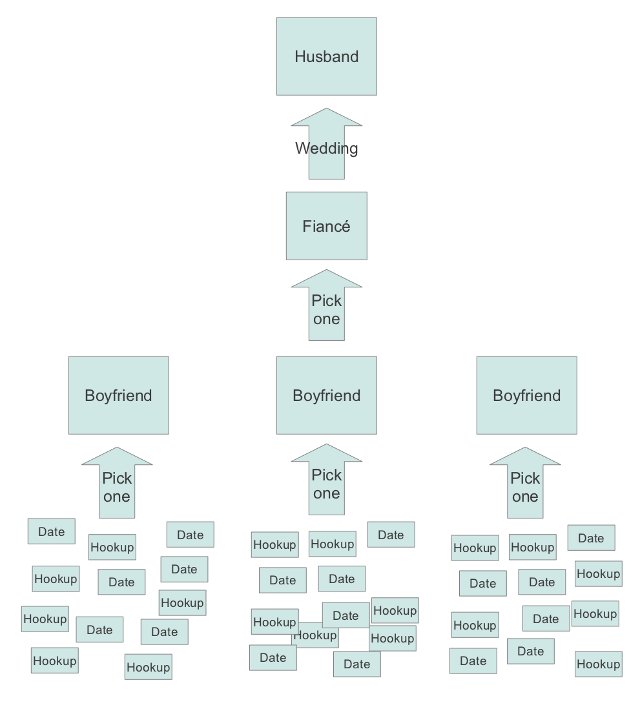 The criticality of the boyfriend step is evident in the amount of energy directed towards ensuring that hookups result in as Susan Walsh would say “relationships”.  Random groping/sex isn’t something one would logically think should result in men offering to be boyfriends, but it must occur for women to be able to both engage in unrestrained hypergamy and expect the eventual status which comes only with marriage.  Anyone even remotely threatening this crucial step from hookup to boyfriend can therefore expect to draw the outsized wrath of white knights and slut apologists everywhere.

Even modern divorce culture can be seen as an attempt by women to expand the class of boyfriend.  This in fact is the natural state feral women seem to want to push to from either direction.  In the case of hookups and dates, women will attempt push men they retain interest in up into the boyfriend position.  In the case of a husband, feral women are pushing them down back towards the (ex) boyfriend position:

Note that even here, the position of husband is still maintained as actual husbands are demoted to boyfriends.  This is because there is still greater status associated with the concept of lifetime monogamy.  Once she finds “the one”, she still wants to reserve the full status of wife for herself.

See Also:  How young should a woman marry?

This entry was posted in Choice Addiction, Death of courtship, Finding a Spouse, Marriage. Bookmark the permalink.

211 Responses to The boyfriend invention