I know for many of you this really isn’t a bad place.  If you are a feminist or a player, this is pretty close to paradise.  But if you are like me you very much want to leave.  Everyone always asks, why don’t we just build a boat and sail away from here?  We could make it to the land of sanity.  But it isn’t that simple I’m afraid.  Every time it looks like we are about to make it home, one of the Gilligans manages to screw it up.

Keep in mind that Gilligans aren’t malicious by nature.  They also want to leave the island.  But unfortunately they are rather simple and easily distracted.  It wouldn’t be such a problem if there weren’t so many of them.

Take for example the issue of out of wedlock births.  Gilligans are especially susceptible to what I call the it takes two fallacy.  In the proper context it isn’t a fallacy at all.  If an individual woman has a child out of wedlock, it is a fact that there is somewhere a man who is also responsible for the problem.  So far, no problem.  But the Gilligans want to use this to form social policy.  They mistakenly apply at the macro level what is only true at the micro level.  They assume this means if you have 100 baby mamas, that there must also be an equal number of baby daddies.  They took this logical error and combined it with their natural sympathy for sluts, and decided to create a social order where only men are punished for out of wedlock births.  What they didn’t understand is that it only takes a small number of irresponsible men to sire all the bastards the baby mamas could ever want.  No matter how draconian our child support laws become, there will always be a small number of irresponsible men who are willing to play their part.

We’ve tried the Gilligan way for over fifty years now, and even though it has brought us from single digit illegitimacy rates to 40% and climbing, no one can talk any sense into them (chart source). 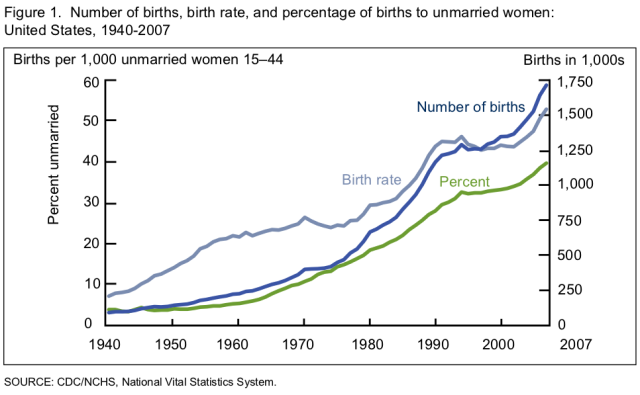 You explain it to them slowly and carefully, and they nod at all the right moments indicating they understand.  Then a feminist comes by and whispers “double standard” or “it takes two” in their ear, and the Gilligan instantly forgets everything you just explained to him.

The same thing applies to slut shaming.  Gilligans love their rule of it takes two, and they apply it there as well.  Again at the micro level if we are considering the issue of individual sin this would make sense.  But Gilligans live in fear of the dreaded double standard.  It keeps them awake at night with visions of unhappy sluts crying out to them.  Why do we have to shame sluts? they plead, Lets shame the players instead.  They are the really bad ones anyway.  We know from the history of civilization that slut shaming is what works.  But the Gilligans are haunted by the faces of the unhappy sluts which fill their dreams.  They are desperate for another solution, any solution, so long as it doesn’t mean unhappy sluts.

Assume we are starting off with 100 sluts and 30 alphas/players.  The sluts are happily riding on the alpha carousel.  Now we introduce slut shaming.  It isn’t fully effective of course, but it manages to convince 15 of the would be sluts not to be sluts after all.  This means an additional 15 women are again potentially suitable for marriage.  This directly translates into fewer fatherless children.  This also makes the next round of slut shaming easier.  Instead of having 99 peers eagerly cheering her on her ride, each slut now has 15 happily married women shaming her and only 84 other sluts encouraging her.  After the next round this becomes 30 happily married women shaming the sluts, and only 69 other sluts cheering them on, and so on.  This process continues until all but the most die hard sluts are off the carousel.  You will never discourage them all, but you can do a world better than we are doing today.

Start with the same base assumption of 100 sluts and 30 players.  Now apply shame to the players.  Unfortunately shame is less effective on players than it is on sluts, so instead of discouraging 15% of them (4.5) in the first round, it only discourages three of them.  No problem! says the Gilligan, at least there are now three fewer sluts now that three of the evil alphas have been shamed away, and all without creating any unhappy sluts!  But unfortunately it doesn’t work that way.  The remaining 27 players are more than happy to service the extra sluts.  They are quite maddeningly actually delighted with the new situation.  Even worse, the next round of player shaming is even less effective than the first.  This time only 2 players are discouraged, and one of the other 3 realizes that his player peers are picking up the slack anyway and reopens for business.  This means in net there are still 26 players, more than enough to handle all of the sluts you can throw at them.

But it gets worse yet.  Now that the ratio of sluts to players is even less in the sluts favor, the sluts actually get sluttier!  They now have to compete even harder for each player’s attention.  Now we have 100 even sluttier sluts!

But what if we could shame all of the players? the Gilligan asks.  That way we could still achieve our objective and I wouldn’t have to be haunted by unhappy sluts!  In theory of course the Gilligan is right.  If you could shame all of the players into hanging up their smirk, you would then be able to stamp out sluthood forever.  However, the Gilligan is once again barking up the wrong tree.  Shame only works on those who are susceptible to it.  Unfortunately players tend to possess the dark triad personality traits.  It is actually a large part of what makes them attractive to the sluts in the first place.  Our little buddy won’t hear of it though, and presses on with his plan to shame a group of narcissistic psychopaths to forgo their own pleasure for the good of society.

The hybrid Gilligan approach:  Shame them both equally!

While the Gilligan would prefer not to have to shame sluts at all, his mortal terror of the double standard compels him to hold out for player shaming, even when agreeing to shame sluts (at least in theory).  The problem is shaming players has the side effect of reducing the impact of slut shaming.  This is rationalization hamster steroids.  The moment concern for the double standard is introduced into the mix, even a little bit, sluts, their moms, and white knights will all rationalize that it wasn’t really the sluts’ fault.  We’ve seen this with Jennifer Moses, the mother who wrote the Wall Street Journal article on the damage promiscuity is doing to young girls.  Even after acknowledging the great harm this is causing young women she wrote:

I wouldn’t want us to return to the age of the corset or even of the double standard, because a double standard that lets the promiscuous male off the hook while condemning his female counterpart is both stupid and destructive. If you’re the campus mattress, chances are that you need therapy more than you need condemnation.

Better your daughter need therapy than commit the dreaded sin of the double standard!  Anything but that!  We see the same rationalization in pop music as well.  I could go on, but you see it simply doesn’t matter.  I could show charts and stats and tell them about the millions of innocent children and even the sluts themselves who are harmed by not shaming sluts.  I could have every Gilligan on the island fully convinced.  But after all of that it would only take one slut or feminist to walk by and whisper “double standard” and it all would wash away.

Welcome to my hell.