Do women want to get married?

Several of the commenters in the discussion on my post All the lonely feminist spinsters challenged my assertion that women want to get married.  Krakonos accused me of being old fashioned:

You seem to be trapped in old fashioned thinking. First of all you suppose the women will want to get married. No, they will just become single mothers. With enough single mothers in society the government has no option but provide for them whatever it costs, literally (even things like destruction of society). Second thing you suppose is monogamy. This is false even these days. If you look at male part of the marriage charts, you will see significantly more never married men then women (in 30s and 40s). It proves existence of serial monogamy – factual polygyny. It is not too far away polygyny is institutionalised in the west.
Women cannot lose, only society can (compared to other societies).

Zed was a little more circumspect:

Frankly, I don’t think you understand the point of view of women delaying marriage well enough to talk about it.

The great lie of our day is that women don’t really value marriage, and that tens of thousands of years of programming to fear spinsterhood has magically been erased.

The proof of this is overwhelming.  Kate Bolick was a fish/bicycle feminist starting in the third grade, yet she tells us in the article that she always planned to marry at 30.  The whole article is about how much she regrets not having married, although she doesn’t come out and say it.  Why else would she devote so much time to the man who got away, the man she took shopping for the outfit he would wear while marrying another woman?  Does anyone who read that doubt that this crushed her?

But it isn’t just Kate.  As Zed can attest, the women who are 40ish now grew up steeped in feminism from day one.  Yet 90% of white women of the same age in the US have married.  This isn’t 90% of white women who said they wanted to marry, excluding the morbidly obese, lesbians, homely women, and hairy legged feminists.  This is 90% of all white women by age 40.  Think about this.  How deep did some of those women have to dig to make sure they didn’t lose out on their ceremonial trip down the aisle?

And as Interested pointed out, all of the young women Kate spoke with at Susan’s house were horrified at the idea of not being able to eventually marry.  From the original Atlantic article:

“Take a look at me,” I said. “I’ve never been married, and I have no idea if I ever will be. There’s a good chance that this will be your reality, too. Does that freak you out?”

“I don’t think I can bear doing this for that long!” whispered one, with undisguised alarm.

I REMEMBER EXPERIENCING THAT same panicked exhaustion around the time I turned 36, at which point I’d been in the dating game for longer than that alarmed 22-year-old had, and I wanted out.

Again, the author is a fish/bicycle feminist from early childhood;  she has her advanced degree and her high status job as a writer in the big city.  What she doesn’t have is a husband and a baby, and this is killing her.  It isn’t that she didn’t want marriage, it is that she thought it would always be there for the taking.  The idea that it might not be is what freaked the young women out at Susan’s house.

On the subject of babies, Krakonos asserted that the women will just become single mothers.  From a practical (male) perspective this might make sense, but from a status (female) perspective it misses the mark by a mile.  Having a child out of wedlock is low class.  The aversion by non low class women in the US to have children out of wedlock shows up in the data I shared previously: 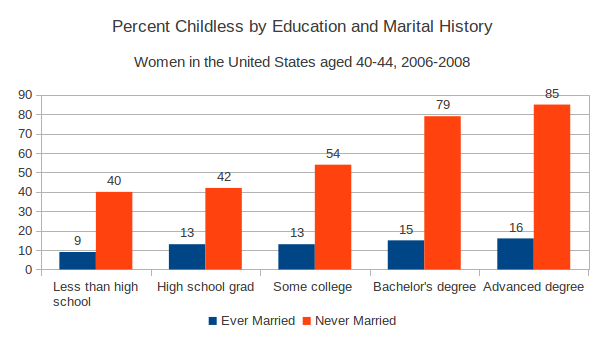 What often throws men off when considering this is that if women can’t get all of the above from the same man (plan A), they will often resort to getting these things from different men (plan B).  But this doesn’t change the fact that plan A is the preferred plan.  Slutting around with alphas who won’t commit and then marrying a beta provider at the last minute isn’t plan A.  The sluts would far prefer to have the investment and commitment come from the alphas, as Roissy points out in The Duke Rejection List (crass site warning):

this chick was rejected by each and every one of these high status men she banged.

“But how can that be?”, some of the duller among you will ask. “None of the men turned her down for sex.”

Don’t you know it’s different for women? Failing to get laid is not how women are rejected; they are rejected when they don’t receive romance, love, and long term commitment from the men who f*** them.

The reason women don’t want to commit while seeking commitment from the man is not because they want to hop from man to man.  It is because they are afraid they will want another man more down the road.  Paige described this mindset perfectly in her comment on my post The ethics of pump-n-dump:

Susan described this in the comments section of the last post:

In fact, young women do want boyfriends, they’re just not seeking to march down the aisle right away. The average woman will spend 8 years between high school and marriage. Dalrock has written before about LTRs not being a form of real commitment, and I agree. Still, many college women do want LTRs – they want serial monogamy. I am speaking in the abstract here, not describing who they want. That is another question.

What is unspoken is that these women are holding out for a bigger better deal.  The longer they delay marriage, in their mind the more courtship they can accrue and the better man they can expect to marry.  Just because the idea is absurd, it doesn’t mean they aren’t thinking this way. The only thing which keeps women from extending their search forever is the fear of losing the option to choose.  This fear is the foundation of endless chick flick and chick lit plots, and the reason the label of spinster hasn’t lost it’s massive punch to women in this “enlightened” age.  Note that both Kate Bolick and the girls at Susan’s house expressed feeling this terror.  The only thing which holds this terror at bay is the expectation that the woman can get off the carousel at any time she wants.  So long as she believes that all she has to do to get married is click her heels together three times and say there’s no place like home and poof she is married, she can keep the terror at bay and feels safe remaining on the carousel.  Take this comfort away, and you are left with sheer panic.

This panic has always been there and will always be there;  all that is different today is when this panic tends to set in.  In previous generations young women feared being left behind in the great husband hunt as early as high school.  As they witnessed other young women paring off with the best men in serious relationships with the potential to lead to marriage, they were motivated to do the same.  Over time this was pushed out to just after high school, then college graduation, and eventually met the fairly immovable boundary of their declining fertility in their 30s.  This fear is what keeps women from aimlessly searching forever for the mythical better man they know has been secretly pining away for her, but for some reason hasn’t yet appeared in her life.

The extended delay of the timing of this alarm for women is why ordinary high school and college men today find it so difficult to find a woman who wants to be in a relationship.  So long as they aren’t faced with an immediate need to secure commitment and investment from a real life man, many women are content to live in a fantasy world where a long list of poor to mediocre choices magically leads to the best option imaginable.  Ordinary men are mentally compared to the fantasy man, and of course can’t hope to compete.  Only the fear of losing the option to choose brings these women down into the real world, where their own attractiveness determines the quality of man they can attract.

277 Responses to Do women want to get married?