Supply and demand in the marriage market.

My last post Starting young featured a five year old girl who was already practicing saying no to prospective suiters.  As Elusive Wapiti pointed out, it is fairly evident that she has been coached, most likely by her mother.  The sentiment is hardly new, and is a standard feminist mantra.  The premise is not only that women are somehow demeaned by marrying at a young age, but that wives are the scarce resource and husbands are a dime a dozen.

While the idea is anything but new, the widespread postponement of marriage by women in their 20s is happening to a degree we haven’t seen before.  What will be interesting is to see how correct the implicit assumption of there always being another man interested in marriage turns out to be.  I’ve shared the US Census data before on marriage rates in table form in the past, comparing marriage rates for white non hispanic women in the 1999 and 2009 census.  Hearing the 5 year old’s screed made me want to take a fresh look at the question, using data from the 2010 census as well as the same data from a decade ago.  Here is what it looks like in graphic form: 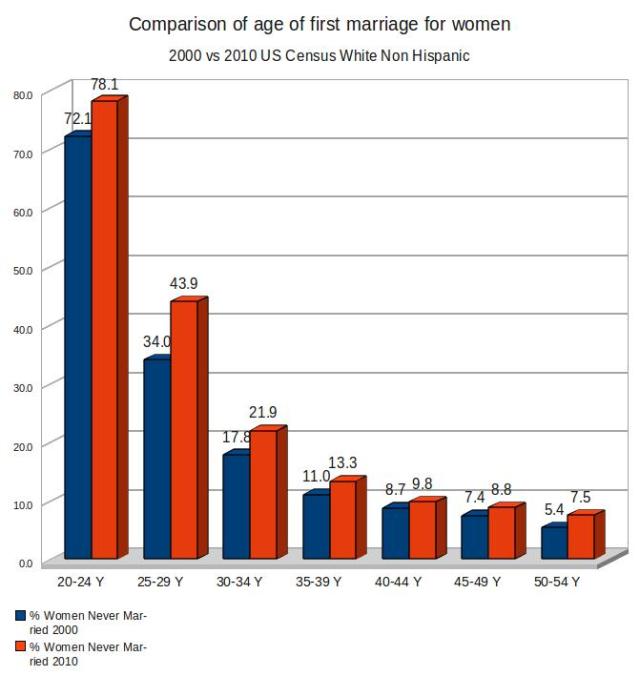 I made a separate chart with just the deltas: 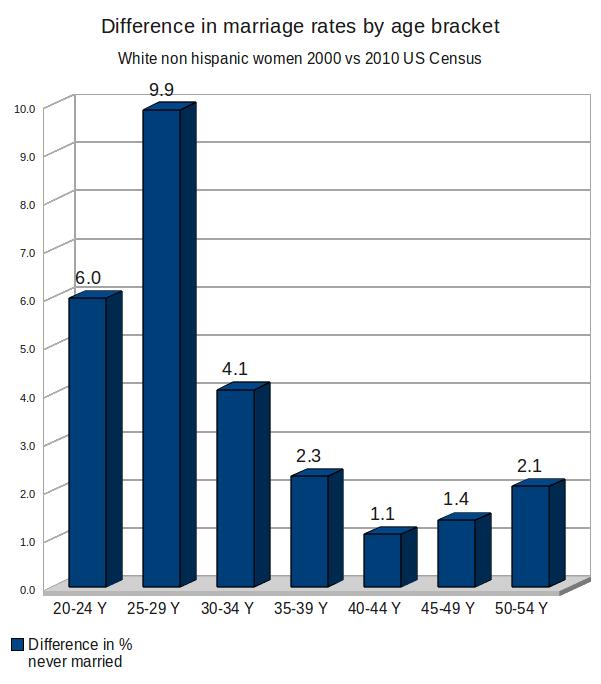 Interestingly women are still marrying at fairly comparable rates in their early twenties, but are falling much farther behind their sisters of 10 years ago by their late twenties.  Those women in their early 30s today are the same ones who were in their early 20s in the 2000 census, so you can’t necessarily predict that today’s late 20 something women will catch up in their thirties.  They are starting from a very different baseline.

In fact it would be quite surprising if they were successful en masse in their bid to postpone marriage past their most marriageable years and still marry at previous rates.  All of the factors would seem to line up against them.  The most marriage minded and eligible bachelors around their age range have either already been selected by their quicker to the draw sisters, or are interested in marrying women 5 to 10 years younger than they are.  Additionally, the surplus of single men to women has largely disappeared by the time they are in their 30s.  Add to this that a large percentage of available men have likely either learned to be a player or dropped out of the dating market, and the true uphill nature of their path becomes painfully evident.

As a collective today’s unmarried twenty something women have made men an ultimatum: I’ll marry when I’m ready, take it or leave it.  This is of course their right.  But ultimatums are a risky thing, because there is always a possibility the other side will decide to leave it.  In the next decade we will witness the end result of this game of marriage chicken.

What I think it will all come down to is who needs/values marriage (as currently defined) more, men or women.  This isn’t something that we can think of in terms of absolutes, though.  The same man may decide a feminine and chaste early 20 something woman is worth the legal risks men face in marriage, while coming to the opposite conclusion for her ten year older former alpha chasing career gal sister.  The older sister is betting that at the end of the day enough successful men will blink when faced with the choice of starting a family with her vs not starting a family at all.  We won’t have to wait too long to see if their gamble is right.

If it turns out their gamble was incorrect, this would seem likely to precipitate a wide spread power shift in the marriage market.  Just like a real estate market can quickly shift from a sellers to a buyers market, we could see a sea change where men see themselves as the scarce commodity and women fear being the ones without a seat when the music stops.

164 Responses to Supply and demand in the marriage market.