Driving a stake in the heart of the US marriage strike myth.

In my previous post Marriage Strike? I exploded the manosphere conventional wisdom that the US is in the throws of a marriage strike.  I pointed out that the metric published by The National Marriage Project is being widely misinterpreted, and showed that the vast majority of current white men and women in the us in their mid 30s have married at some time. I also made it clear that women in their 20s today are making very different choices as a group than women the same age did just 10 years ago, and that we can’t assume they will be able to marry at the same rates we see today. We may yet see a marriage strike by white men in the US, but the data simply isn’t in yet.

What is the metric?

The chart in the original Spearhead post titled The End Of Marriage used data from The National Marriage Project report The State of Our Unions, Marriage in America 2009: Money & Marriage. For comparison, see figure 1 from page 64 of the report.  In the notes at the bottom of figure 1 it explains where the data comes from.  They had to compile the information from several reports, but much of the data series came from the U.S. Department of the Census Statistical Abstract of the United States, 2001, Table 117.

There are two ways the number of unmarried women can change over time as it did.  The first is the population of women over 15 years of age can increase, and the second is the percentage of time those women spend married can decrease.  We know that both of these have happened.  Total US population  increased from roughly 200 million in 1970 to 280 million in 2000.

The percent of women who are married at any given time has also decreased due to fewer marrying, later marriages, divorce, and reduced remarriage.  Whereas people in the 1960s spent the vast majority of their adult lives married, people now spend far less of this time married and more time putting off initial marriage and following divorce (see Figure 2 in above linked Marriage Project report).

So part of what the metric is picking up is population growth increasing faster than the total number of weddings, and part of it is due to us spending less time being married.  The less time being married factor is an important trend but a separate issue from the claim of a marriage strike.  If as I showed 85% of white women are still able to marry by age 35 but they are waiting longer (and perhaps divorcing sooner), this doesn’t show that men are on strike.  Marrying an older, less hot woman and then having her divorce you isn’t being on strike.

This leaves the question of population growth, but this in itself brings back the issue of demographics which I mentioned in the initial post.  Not only is our population changing, but the racial makeup is changing as well, and marriage rates vary greatly by race.  Any part of the change which is being driven by changing racial demographics wouldn’t support the hypothesis of a marriage strike.  In order to keep things simple I focused on whites, which make up 75% of the US population (and probably a greater percentage of the adult population).  I don’t have timeline data on the percentage of whites who married by age in the US going back before 1999, so I shared the data for 1999 and 2009.  For both time periods roughly 85% of white women had married by the time they were 35.  It is possible that back in the 60s and 70s this number was something like 95%;  I have no idea.  If someone has this data please share it.  Still, 95% feels like a theoretical max to me, and it is very close to the 90% we see today and 10 years ago for those in their early 40s:

So there might be a small shift down in white lifetime marriage rates in the US over the last 50 years, but right now it is so close to 100% it can’t have been large.

For a picture of how this looks across races, I found the following chart in the report Who Marries and When? Age at First Marriage in the United States: 2002:

Keep in mind that these projections are based on the status quo 8 years ago.  So far these projections have held roughly true but we have already seen a shift to lower marriage rates for women now in their 20s.   As I said in the original post, we can’t predict the future and can only speculate.

One other more subtle form of marriage strike in the US might be under way which wouldn’t necessarily show up in the data we have already reviewed.  It is possible that the most desirable men are now less likely to be willing to marry, especially the high earners and those with game.  As women delay marriage they may find they have to settle more than their predecessors did and marry lower status men who might otherwise have remained unmarried (or married even later).  The highest status men starting to become more likely to opt out of marriage would make some sense, and at the very least the data doesn’t disprove this hypothesis.  However, I can’t find anything which proves it either.  Here is what I did find from the same report regarding likelihood of marriage by economic status: 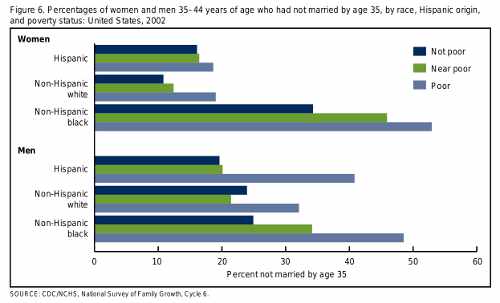 This doesn’t really prove the issue either way because the category “not poor” is a very broad one.  Also, there is no proxy I’m aware of for a man’s game.

Lastly, while the data doesn’t (yet) support the hypothesis of a US marriage strike, I showed yesterday that there is clear evidence of a remarriage strike.

I hope this clears the question of a US Marriage Strike up for those willing to approach it with an open mind.  I understand that for the true believers no amount of explanation or data will prove otherwise.  I also understand that it is possible likely that I will at some time make a mistake.  Please don’t hesitate to point any errors you find out to me in the comments section in a respectful way.  However, please also note that telling me to learn calculus, generally accusing me of spinning the stats, or telling me If you figure it out, you will believe it aren’t valid forms of feedback.

See Also:  Supply and demand in the marriage market.

This entry was posted in Marriage Strike Myth. Bookmark the permalink.

52 Responses to Driving a stake in the heart of the US marriage strike myth.