I coined the term post-marital spinsterhood when I created the spoof warning label for Eat Pray Love.  Women finding it difficult to remarry after divorce is something I’ve noted personally amongst my own generation.  Many women my wife and I know our own age have been very surprised at the lack of long term interest they received from men following divorce.  This same phenomena was documented by the AARP study on late life divorce which spawned the Grey Divorce hype.  However, keeping with the standard spin for divorce in academia and the media, the study featured a picture of a sad old man on the cover and the news stories about Grey Divorce all painted a rosy picture of late life divorcées feeling empowered by this “exciting new trend”.

The actual findings of the study were that men fared better than women in a number of ways following late life divorce.  It painted a grim picture where a surprisingly large number of women ended up struggling financially and receiving no sexual contact from the opposite sex, not even hugs. Here are some quotes from the report that you won’t learn from the cheerleading Grey divorce articles (emphasis in quotes is mine):

I think it is no accident that the reality of the study wasn’t made widely known.  Feminists in academia and the media have an agenda to sell divorce to women.  They know that women won’t find the idea so enticing if they realize it quite often is a one way door to a much lower quality of life.  This is because while women often fantasize about indulging in endless choice of mates, they also want a high level of investment from men both for the practical advantages and the status this confers on them.  This is a large part of the reason spinsterhood has such a negative connotation.  No woman wants to end up without a worthy man invested in her.  In the early stages of the sexual revolution women quite often were able to have their cake and eat it too.  But the data I have found which I have shared here suggests that this is no longer the case.  Meanwhile the media is selling a dangerous fantasy which is leading many women into awful situations they can’t get back out of.

When Stella got her grove back, women across the world swooned at the idea of a 40 something divorcée bagging a newer, younger man.  Even more exciting, just like with Eat Pray Love, the author based the story on her own life experiences.  Terry McMillan wrote the book which became the movie after meeting and eventually marrying a Jamaican man 23 years younger than her.  Here is a picture of Terry and her new young hottie (full article):

Oh wait!  I did it again.  That’s them in the movie.  Here is the real life author and her younger husband. 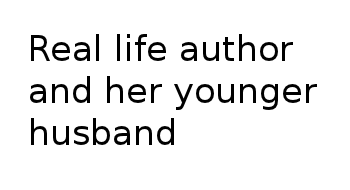 Also like Eat Pray Love, it later came out that the dreamy younger man only married her for a visa.  He also was looking to cash in on the royalties from the deal. Oh, and he also forgot to mention he was gay when he married her. Evidently that was a deal breaker for the author, and the two have since divorced.  From SFGATE.com:

It was devastating to discover that a relationship I had publicized to the world as life-affirming and built on mutual love was actually based on deceit,” she wrote in her declaration. “I was humiliated”.

Adding injury to insult, Terry was then forced to pay him spousal support even though he had signed a prenuptial agreement.

The divorce and new/better man theme is extremely common.  All you have to do to find other examples is check out the women’s fiction section of amazon or turn on Lifetime to see more stories like EPL and Stella.  The last example that came to mind when writing this is a real estate commercial they ran in the US a few years back focusing on how the Realtor had helped a 40 or 50 something divorcée buy a new home to start her exciting new life.  Within a year she had married the next door neighbor who was a university professor.  The end of the commercial showed the woman leading a line of dancing revelers around the backyard of her new home, with her dressed in a wedding gown and carrying a bouquet.  The message of the ad was clear;  dump your loser husband and we’ll find you a new better man along with a new house! Of course, they made their money whether the pipe dream panned out or not…

Edit Oct 29: Added quotes from the AARP study and the fact that Terry was forced to pay spousal support.